Powelson Family Research WORK IN PROGRESS: SOME CONNECTIONS HAVE NOT BEEN VERIFIED. MISPELLS ARE ON PURPOSE TO MATCH RECORDS FOUND.

From Frank W Powelson's book: "The Powelson family were originally from Norway but removed to Holland before any of the name came to this country. From New Barbadoes they scattered and some located on Long Island, N.Y."

The History of North America, Volume 4, by Guy Carleton Lee and Francis Newton Thorpe states that Jacob Powelson, was the captain. "The ship sailed under the Swedish flag, although her passengers and crew were Hollanders.

"The Powelson family came very early to this country. Capt. Jacob Powelson is recorded as having arrived from Holland in the ship Vredenburg on Jan. 24, 1640. Nicholas Powelson came from Ditmoreen in the ship "Glided Otter" in 1657, and Gommen (Goruimen, Gorman, Gomen, Gowman) Powelson, or Paulison, from Antwerp in the ship "St. John the Baptist" in 1661. From these the Family in America is supposed to have descended.”

Child of Jacob H Powelson is Cornelius Powelson, born Abt. 1676 in Flatbush, New York. Some believe Cornelius’s father was Gommen

A history of Somerset, NJ settlers show that he was one of 30 heads of families that immigrated, possibly from Dutch parentage, to NJ and settled near Pluckamin. The named settlers were Dutch, English, and French Huguenots drawn to the area for religious freedom. They helped form the Raritan Church and Dutch Reformed Church. Cornelius married Jannetje Andries in New York City on October 11, 1696. He spelled his last name Pauelsen. The record is on microfilm at Family History Library, Salt Lake City, Utah (The New York Genealogical and Biographical Record Society), Marriage ID 2220286869, Page 128. 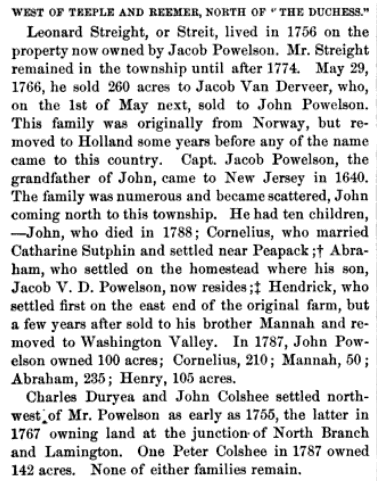 Powel Powelson was born 10/17/1716 in Sommerville, NJ to Cornelius Pauelsen and Jannetje Andries. He married Magdalena Lena Smock in 1750. He was the head of the Virginia branch. They had 11 children, of whom he split his land in 12 portions to include wife and all children in will dated 4 Dec 1805. He died in Hampshire, VA in 1805. Their children were:

Lewis was born in 1777/1778 in New Jersey. He was possibly an illegitimate child of Ann Antje Anna Powelson. He did not know, or recognize, his father's name and took his mother's last name of Powelson. He married Rachel Pownall in 1809 in Virginia. He fought in the Revolutionary War with his Uncle. 12 soldiers listed in Index of the Official Register of Officers and Men of New Jersey in the Revolutionary War: Powels Powels, James Powleson, John Powlson, Abram, Cornelius, Hendrich, Henry, John, Martin, Monah, Powell, and Richard. In 1812, Lewis was listed on a personal property tax roll in the lower district Hampshire County, West Virginia. Also listed are: Elisha Pownall (Rachel’s father), Cornelius Powelson, Rynier Powelson, John Powelson, and Charles Powelson.

They moved from Hampshire County, West Virginia to Ohio in 1818. "Made journey on horseback, mostly through an almost trackless and unbroken forest, the mother carrying her then youngest child Abraham on her lap or in her arms while Abilgail rode behind her on the same horse." First settled near Wills Creek, in Linton township. A few years later he purchased a farm in Franklin Twp.

Lewis was a great fisher and hunter and took great delight in relating his experience to the younger generations. He and his wife attended the Methodist Church. He died 1/24/1864 and is buried in Franklin Cemetery in Franklin Coshocton County, OH. Lewis had 10 children: Abigail, Abraham, Anne, Isaac, Jacob, Samuel, Rachel, Lewis, Isaiah and John G.

Isaac was a Private in the US Civil War on the Union side. He enlisted in the 122nd Regiment, Ohio Infantry. He was married to Sarah Walker until she died in 1842. Their children were Elizabeth, Charity, and Mary Jane. He married Sarah Wells. Their children were James, John G, Rachel, Robert, Lucinda, Abner, and Malone. He was a sterling Democrat and assisted in democrat campaigns. His social life was sometimes posted in the various local newspapers. He died in 1893 of cancer of the face. 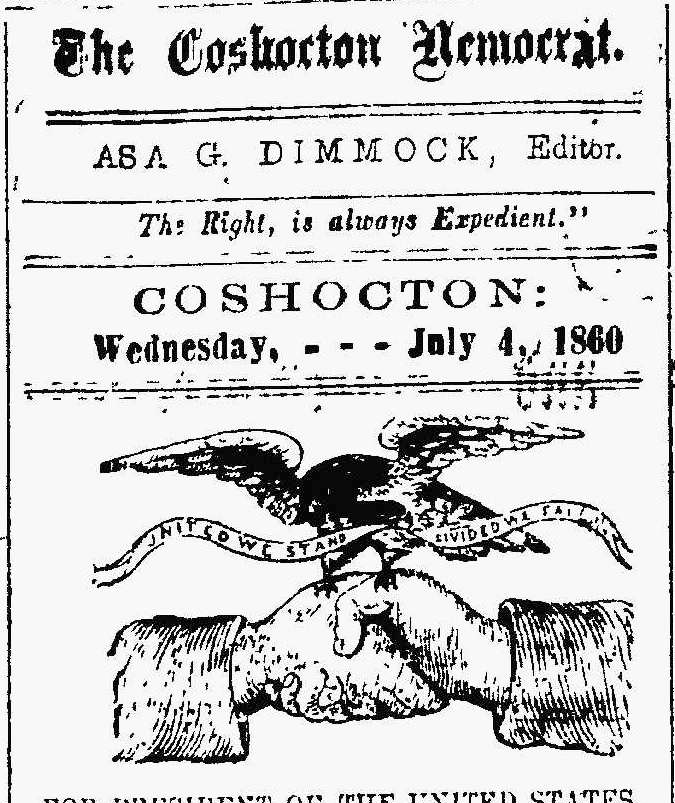 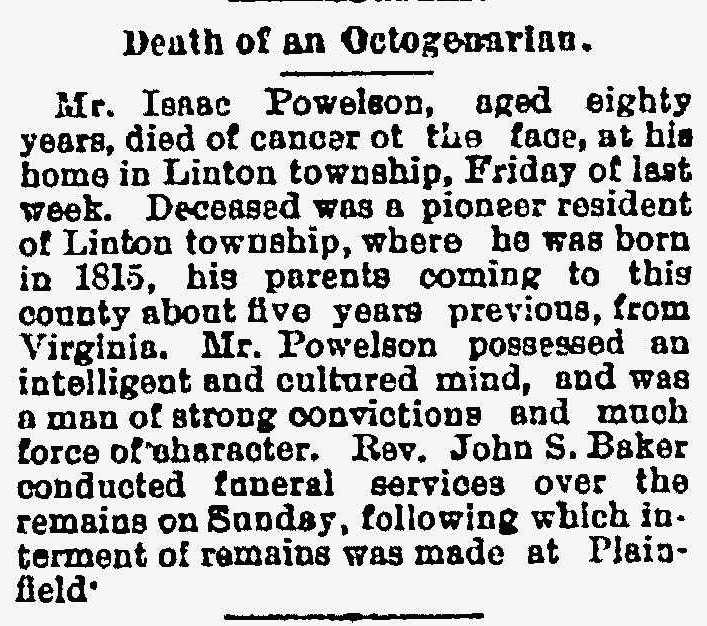 John married Quincy A Phillips in 1870, but she died 4 years later. They had 1 son, named Thomas. He married Clarinda Babcock in 1878. They had Alma Belle, Nelva (or Nellie), George R (or Roy), and Ernest. They lived on a farm in Linton, OH until they moved to Kansas in 1885. An obituary found for Clarinda stated they had 6 children: 2 died in infancy.

Ernest married Vera Clair Brown. They owned a farm in Hayes, KS by the age of 25. According to his WWI draft card, he was a medium build, had blue eyes, and dark brown hair. He moved his family to Cheyenne, Colorado and started another farm before 1930. In 1940, he was a bar tender in a bar parlor with his son in McAllen, TX. The bar was named the "Silver Slipper," but was called the "the Old Iron Boot." In 1942, he was a manager of Drive Inn Cafe Filling Station in Mission, TX. When he passed away in 1958, he was retired from the agricultural business. He had bronchogenic carcinoma, but ultimately died of pneumonia. In his autopsy, they also found that he also had metastasis to brain and both adrenal glands, which probably meant the cancer was spreading or had spread. They only had 1 child, Kenneth Roy Powelson. 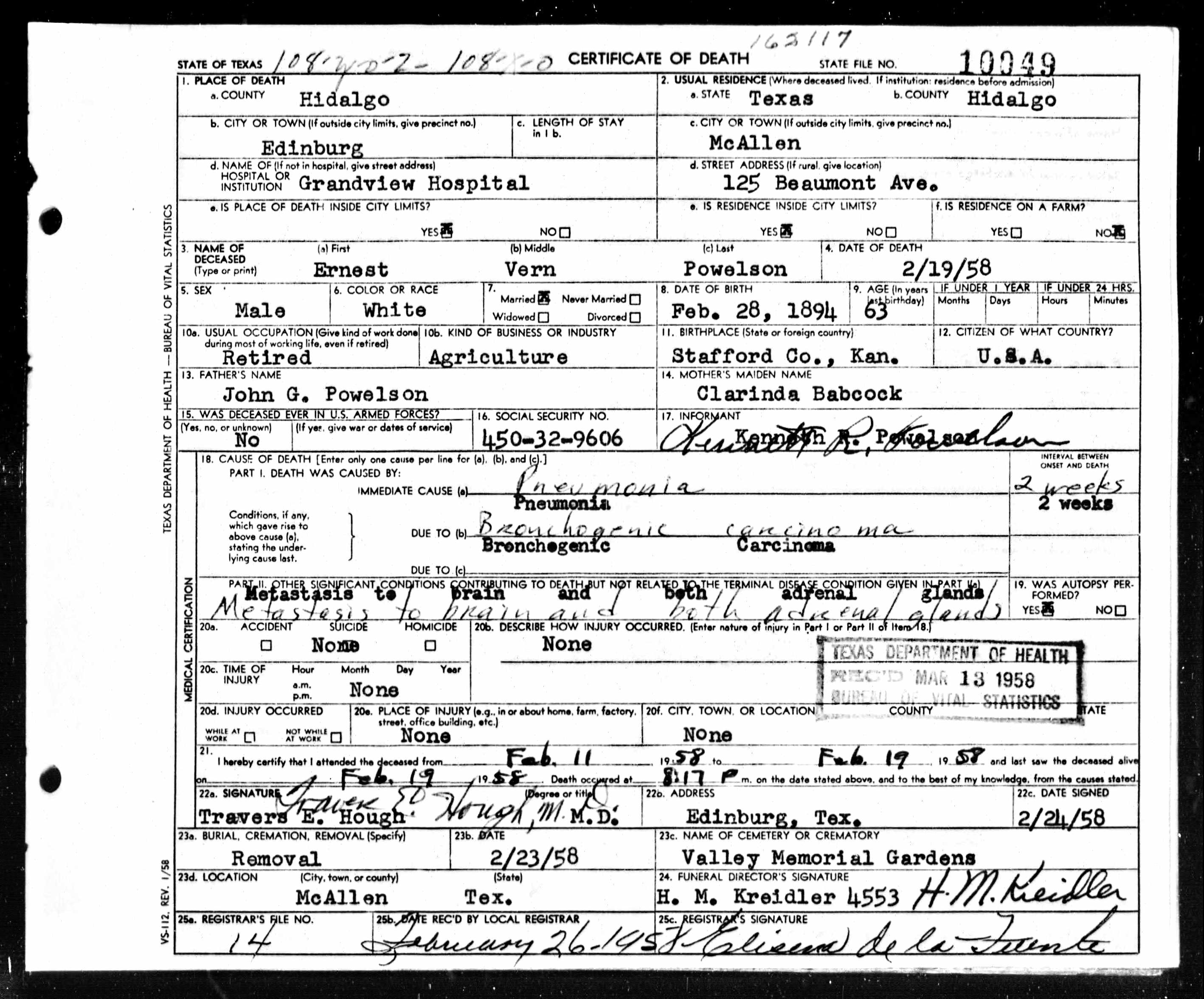 Roy Powelson married Katie Louise Farmer. Roy was a bar tender in 1940 with his father at a bar parlor in McAllen, TX. He was a US Navy Reserve and served in WWII. In the end, he was a mechanic living alone in an apartment. On 11/10/1964, he checked himself into a UTMB in Galveston, TX, where he died 3 days later of acute peritonitis caused by carcinoma (head) of pancreas. They had 3 children: Robert "Bobby" Roy, William "Billy" Ernest, and Marilyn Leanne 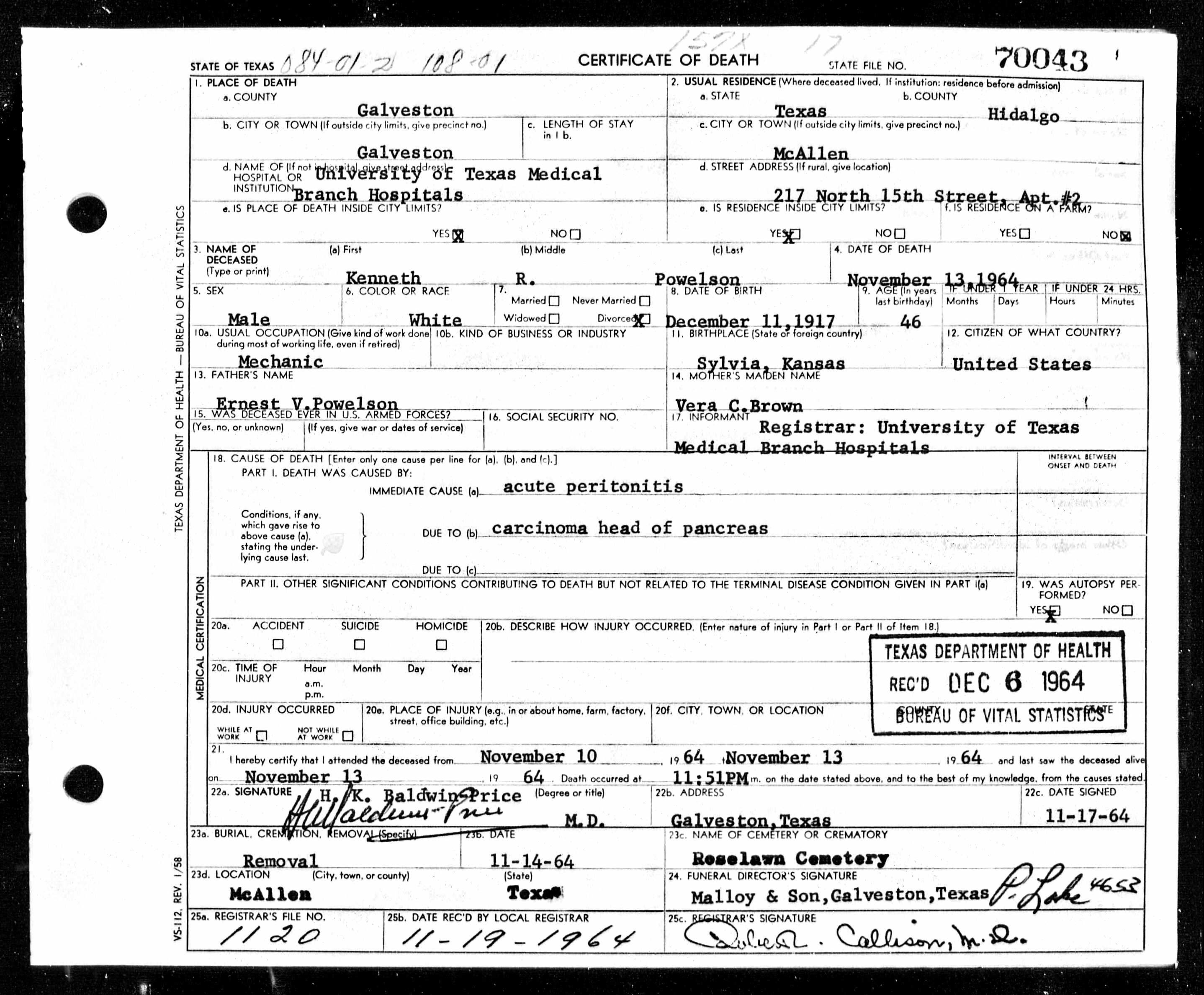 Marilyn Powelson married Howell Dayne Johnston in Groves, Texas. They moved to Houston for 5 years, then to Lufkin for 6 years, and finally to Port Arthur, Texas until retirement. In 2009, Dayne retired from Fina Oil Company as #1 operator unloading sulfuric acid rail cars. Dayne and Marilyn sold their home in Port Arthur and now live in Jasper, Texas, on the San Angelina River. They had 2 children: Joel Dayne and Eric Wayne